The twenty year history of Leap of Faith includes an eleven year hiatus that is noteworthy more for the cooperative's ability to seamlessly pick up the pieces than for an uber-extended break. Cellist Glynis Lomon—a one-time student of Bill Dixon—was working the Boston circuit with multi-reedist Pek in the 1990s. The two honed their far reaching technical skills taking them into the Leaping Water Trio, a precursor to Leap of Faith whose 1995 debut included trombonist Mark McGrain and occasional guests.

A rotation of group visitors, with PEK and Lomon always at the center, along with multimedia performances, marked the continued artistic development of Leap of Faith until 2003. PEK left behind his day-to-day music career while Lomon remained involved with other projects, most notably Dixon's Tapestries for Small Orchestra (Firehouse 12, 2009) along with brass masters Stephen Haynes, Taylor Ho Bynum and Rob Mazurek and bassist Ken Filiano. In early 2015 PEK and Loman reunited to perform with the original members of Leap of Faith while lining up a new formation to include saxophonist/clarinetist Steve Norton, and drummer Yuri Zbitnov. 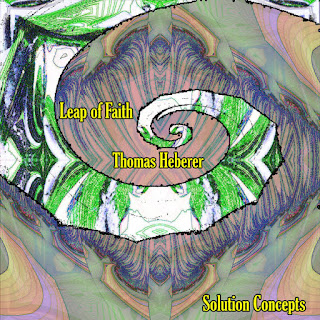 Sharing the billing on Solution Concepts is trumpeter Thomas Herberer who adds significant contributions on five of the six tracks. The album was recorded live at the Downtown Music Gallery in the Chinatown neighborhood of Manhattan on August 16th, 2015. Starting out and fits and starts like an extended warm-up, "Subgame" doesn't take much of its almost forty minutes to be convincingly harrowing. With barely the trace of a melody, the marathon number nevertheless captures some satisfying but inexpressible spirit of wild abandon. In very sharp contrast, Heberer joins the group on "The Great Hill," a study in finely developed improvisation with his solo cornet soulfully expressive.

"Teodoro" takes yet another tack as the experimental piece consists of noises drawn from the musicians pushing their instruments beyond their normal range and augmenting with distorted voices. The brief "Mongezi" and "Loose Ends" again feature Heberer and are less structured than "The Great Hill." Bookending the middle four tracks—all written by Heberer—is another extended improvisation, "Information Sets," clocking in at over twenty minutes. Ranging from a whisper to near-chaos, the piece is strangely musical with Zbitnov's thundering beat supporting approximations of bagpipes and ethereal voices.

Considering the relatively brief number of years that Leap of Faith were actively recording, their output has been prolific and varied. PEK and Lomon have worked in formations from duo to large ensembles. Heberer's presence on Solution Concepts makes it quite different from earlier Leap of Faith albums but true to the experimental vision that PEK and Lomon first realized more than twenty years ago. The music on Solution Concepts is probing, intelligent and—in some instances—poignant.